- Dimensions: Φ14.6× 2mm
-Electrode: electrodes on the same side (customizable )

- Dimensions: Φ14.6× 2mm
- Electrode: electrodes on the same side (customizable )

Dimensions for Ultrasound Flowmeter in stock:

ultrasonic flow rate measurement a distinction is made between two different measuring principles: the Doppler effect and the analysis of the traveling wave time. In both cases a piezo-ceramic transducer positioned on the tube wall generates ultrasonic waves, which are then transmitted into the liquid diagonally to the direction of flow. The Doppler evaluates the frequency shift of the ultrasonic waves, which are reflected by stray particles in the liquid. The greater the flow speed of the liquid, the greater the frequency shift between the radiated and the reflected wave front. Only one piezo transducer sending and receiving at different times is needed for this measuring method. The traveling wave time principle always employs two piezo-ceramic transducers positioned offset to the direction of flow. They send or receive alternately pulse-shaped ultrasonic wave packages against the direction of flow and in the direction of flow. In each case there is a superimposition of sound propagation speed and flow speed. The flow speed is then proportional to the reciprocal value of the propagation time difference in and opposite to the direction of flow. The advantage of this measuring method is that the measurement is independent of the sound propagation speed and therefore also the medium. This enables the measurement of both liquids and gases. 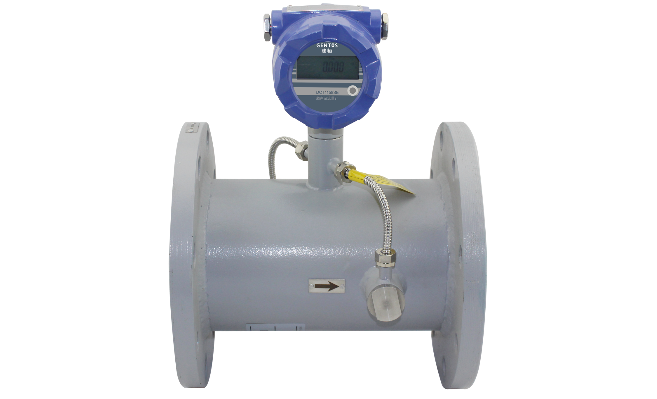