Why use ultrasonic sensors for automotive design assistance?

For many years, ultrasonic sensors have been widely used in passenger cars. For example, ultrasonic parking system can help vehicles detect surrounding objects when it is parking at low speeds. In addition, kick-opening the trunk and intrusion detection alarm are two emerging applications of ultrasonic

Ultrasonic parking assist is also called parking assist system, parking guidance system and reverse assist. These systems can range from simply detecting surrounding objects and alerting the driver with sound to automatic parking with almost no human operation. Usually, these systems have 4-16 sensors, cleverly installed around the body to provide the required detection coverage.

Engineers are designing these types of applications should look for integrated circuits. Which drive ultrasonic distance sensor (transmitters) while is receiving, conditioning, and processing ultrasonic echoes that determine the distance between objects and vehicles. For example, it can reliably detect International Organization for Standardization (ISO) poles up to 5 meters away (polyvinyl chloride (PVC) pipes used for ultrasonic parking assistance as a performance standard). The device has also passed rigorous electrostatic discharge (ESD) and high current injection (BCI) tests, which are routine tests during the development of ultrasonic parking assist systems.

As original equipment face to increase the number of ultrasonic sensors per vehicle, the cost of ultrasonic parking assistance will continue to increase in the next few years. They can provide a competitive cost structure for high-volume suppliers.

Ÿ The ability to detect objects from 30 cm to 5 meters.

To meet the needs of autonomous vehicles, the detection standards for short- and long-distance objects will become stricter. Starting in 2025, ultrasonic modules sensor will have to be able to detect objects at a distance of 10 cm to 7 meters. Semiconductor suppliers’ improvements in analog front-end (AFE) sensitivity and drive methods are critical to meeting these detection distance requirements.

TCI and LIN are the two most common communication interfaces in ultrasonic parking assistance systems today. However, with the improvement of the visual processing capabilities of the automotive advanced driver assistance system (ADAS), it is expected that higher-speed protocols such as peripheral sensor interface (PSI) 5, Distributed System Interface (DSI) 3 or Controller Area Network (CAN) will be applied to transmit a large amount of ultrasonic echo data.

The kick-opening trunk is also called the smart trunk opening system. This function allows the car owner to place his feet under the rear bumper, without using his hands, and only need to kick the foot to open the trunk of the car. 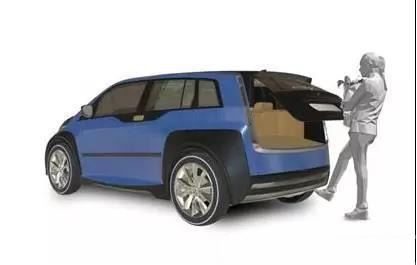 The traditional kick-opening trunk system uses a capacitive sensor strip located at the bottom of the bumper. But many automotive suppliers are exploring the use of ultrasonic sensing technology in this application, and some systems have been mass-produced. Compared with capacitive sensing, the advantage of ultrasonic distance sensor is its reliability and robustness under the influence of environmental factors such as dirt and water. Capacitive sensor is very sensitive to environmental factors. If the body is soiled, this function may not work properly. .

Common requirements for ultrasonic solutions for kick opening systems include:

Let us introduce these requirements one by one.

Object detection from 15 cm to 1 meter

One of the challenges of using ultrasonic technology to kick open the trunk is the short-range detection range. The ability of an ultrasonic sensor to accurately detect near-field objects depends on the quality of the sensor and the specifications of the sensor, the driving method and design, and the performance of the receiving path (AFE and digital processing).

When the transformer is used to increase the power supply voltage to activate the sensor, the attenuation curve is more stable and measurable, making the detection performance of close objects better.

Finally, the performance of AFE and digital processing will also affect the detection of objects at short and long distances. For example,it has a low-noise amplifier, is equipped with a programmable time-varying gain stage, and is embedded with a 12-bit successive approximation register analog-to-digital converter. The low-noise amplifier can reduce the noise of the received signal, and the time-varying gain characteristic of the programmable gain amplifier can realize the application of a smaller gain to near-field objects and a larger gain for far-field object detection. You can store the gain curve setting in the register in the electrically erasable programmable read-only memory (EEPROM).

Since the ultrasonic module transducer sensor  must be operated when the car is turned off when the kick is turned on, the quiescent current of the system is very important, which is a performance that OEMs are very concerned about. They have a sleep mode with a current consumption of 9 to 1500 μA, which can be used intermittently to make the current consumption of the entire system reach the necessary level.

The PGA460-Q1 device is used to work from an input voltage range of 6V to 28V. In kick-open trunk applications, the device is directly connected to the car battery. Appropriate external component protection measures, such as transient voltage suppression (TVS) diodes, help protect the device from battery transients and reverse battery current.

In Europe, intrusion detection alarm is an optional device for consumers when buying a car or installing after buying a car. When the car is stalled and parked, these alarms will use ultrasonic sensors to detect any movement in the car. This alarm is used as a backup system for the main alarm system. If children or pets move in the car, an alarm will be issued. According to the additional anti-theft and safety guarantees, consumers often get insurance discounts because their vehicles have this feature.